Organized as part of the global program Mathematics of Planet Earth 2013, the workshop will take place at Centro de Investigación en Matemáticas (CIMAT) in Guanajuato, Mexico during July 29 – August 2, 2013 and will be a satellite of the 2013 Mathematical Congress of the Americas.

This 5-day workshop will bring together about 40 early career scientists, mainly from Central and Southern America, and nine distinguished scientists, each of whom will give several lectures on chosen topic. The workshop format will provide ample time for personal and group discussions and topical round tables to facilitate networking across the central themes of Natural Hazards research.

The extended deadline for application to this workshop is 30 April, 2013.

It is supported by The International Council of Science (ICSU) Regional Office for Latin America and the Caribbean, by two interdisciplinary bodies of ICSU, namely IRDR (Integrated Research on Disaster Risk) and WCRP (World Climate Research Programme), by the US National Academy of Sciences, and by the Academia Mexicana de Ciencias.

For more information, please go to Mathematical Congress of the Americas (MCA) website.

IRDR Activities and Publications for GP2022
20 May 2022 10:25
The 2022 Global Platform for Disaster Risk Reduction (SP2022) takes place from 23 – 28 May in Bali, Indonesia with the theme “From Risk to Resilience: Towards Sustainable Development for All in a COVID-19 Transformed World.”

DRR Practice from IRDR Young Scientists to close the gap between S&T at local level
19 May 2022 15:47
IRDR young scientists played important roles in closing gap between science and technology (S&T) and its incorporation into disaster risk management at local levels. 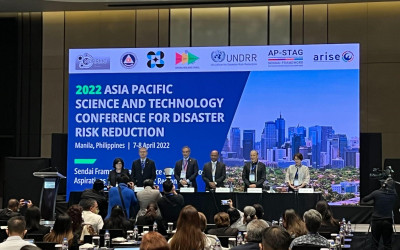 APSTCDRR 2022 promoted the application of STEI in DRR and DRM
16 May 2022 09:38
IRDR co-organised the thematic session of APSTCDRR on science and synergies